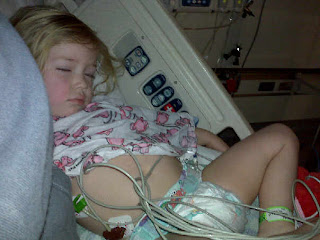 From what we can remember Alivia's symptoms really started showing about 2 months ago. She'd been potty trained for over a year and all of the sudden she started wetting the bed and having accidents during the day and whenever we in the car. She also started drinking a TON of water and anything else she could get her hands on, she even started "stealing" other peoples drinks and chugging then down! About 2 weeks ago I called the advise nurse at our clinic and told her about this, she thought maybe she had a bladder infection and the front desk scheduled me for May 29Th to see the Dr. I knew it wasn't a bladder infection and because of a good friend of mine who's son has type 1 I planned on asking her Dr. to check her for diabetes. Sadly she didn't make it to that appt before becoming REALLY sick. On Sunday May 17th we noticed she had lost her appetite and she became really tired. By Tuesday she started throwing up, her heart was racing and she was breathing really hard...so I called the advice nurse back with the new symptoms, she told me to give her sips of sugared soda and call back in a few hours, which I did. This time I told her she kept the soda down but was still really lethargic, she told me to keep up on the soda and let her "sleep it off". She continued throwing up through out the night and first thing in the morning I called the advice nurse back and told her I wanted to see the dr NOW! I put her in the car for the 20 minute drive to the clinic, she slept the whole time and was having a really hard time breathing, I really wanted to pull over and call an ambulance but I knew I could get her there faster. We made it to the clinic and waiting in the waiting room for a good 10-15 minutes...no rush to them, she just has a little stomach bug. The nurse called her back and weighted her...I was so shocked to see 27pounds!...she lost 7 pounds in a month! The dr came back and I went over the symptoms again and brought to his attention the weight loss. He decided she needed an IV and sent us over to the hospital. He said if she perked up we could go home by the afternoon if not we'd need to stay over night. We got up to our room at Southwest and the first thing the nurse asked was if they checked her glucose level, I told her no and told her about wanting to get her tested because of the bed wetting. She assured me the dr would test her today. They got her IV started and she continued sleeping. About an hour later the nurse came back in and told me my suspicions about diabetes was correct and her blood sugar was at 583! She said they would be moving her down to the emergency room and a critical care transport ambulance from Legacy Emanuel Children's Hospital would be coming to get her and take her to the ICU there. Down in the ER the dr told me that not only were her glucose levels high but that her Keytones were at 6! And she had Ketoacidosis which is a serious condition that can lead to diabetic coma. They started her on insulin and we waited for the transport team. We spent about 24 hours in ICU before we started seeing her improve. We were moved into a regular room and the learning process began. We met with educators constantly and set up a food plan and shot schedule for her. After 4 days in the hospital we finally felt comfortable enough to take her home with us!
Posted by AjsMommy82 at 4:59 PM

Wow your story does sound all too familiar. i can't help but tear up a little when I hear of another kid getting diagnosed. Please, please email me with ANY questions. I have been there a year ago. I know the emotions you are going through. They are so common and sometimes it helps to talk to someone who has been there. I have a list of T1 kids on my blog...feel free to visit them as well. They are a great support. Again, email me if you need to talk or vent or have any questions. s_gneiting@hotmail.com HUGS!

I linked to your blog from over at Shamae's. I, too, have been where you are! My daughter, Kacey, was diagnosed in July 2008 and she was also having the exact same symptoms (bedwetting, sick stomach, throwing up). Please know there is an entire group of us T-1 Moms on here that are willing to give you the support you're going to need during the coming weeks. You can visit my blog and see my blogroll for the links. There are also many older T-1's on there that have given me wonderful advice over the last year and they are willing to answer any of your questions. Welcome to the D-OC (Diabetes- Online Community)

I also linked to your blog from Shamae's! My son was Diagnosed with type 1 at the age of 1 he is now 3 and doing great!! Your story sounds so familiar. We went threw the same thing taking him to and from the Dr. Finally (my doctor got back in town he was gone at this time) and he had me go get X-rays, blood work etc. They called us and told us to rush him to Primary Childrens his Glucose level was at 790. If we would have taken him a day later he would have been in a Diabetic coma. It was the hardest thing to go threw. They told us he got diabetes from a virus. I couldn't believe it. It is a very life changing experience. At the same time it's nice to know that I can take my child home and manage it myself! Please feel free to keep in touch. It's always nice to talk to families who go threw what we do and understand everything! I haven't updated my blog in a long time but it's cramcorner.blogspot.com

In these early days, there is a ton of information to weed through...it can be very overwhelming.

Just know that there is an entire network of mothers waitng with open arms to help you navigate your way on this journey. If you ever have a question about something, just ask. Nothing is too novice and nothing you can possibly think of will be considered "unimportant".

We speak the same language.

Welcome to the wonderful world of Type 1 Diabetes! You're diagnosis story is very similar to ours- I know and understand! You have found a wonderful group of women to connect with- they have been here for me since I started my blog.
My little girl Jada was diagnosed on Easter Sunday (March 23) of 2008- so we are just over a year out from our diagnosis. It's been frustrating and amazing all at the same time. I'm doing things I never thought that I could be capable of doing and more importantly, Jada is still alive and doing amazingly well! She was at the dr. today b/c she picked up a virus, but the dr. told me she looks good and is very healthy for someone with a chronic condition. He didn't know it, but he made my day.
Hang in there- the newness of everything can be so frustrating and even discouraging. You'll get the hang of it and before you know it- you'll be a pro.
Let me know if there is anything I can do!
Lots of hugs and prayers from one D-mom to another!

If you ever have any questions please contact me as well. I have had Diabetis for 24yrs tomorrow I know what its like from the other side of things. Don't ever think a question is weird or anything because we are all here to help out where we can.
email me at fun_girl_22_1999@yahoo.com with any questions.
Teresa

Oh I don't want to say that I know how that feels because #1 it's a sucky feeling and #2 because everyone else is saying it! LOL! But I DO TOTALLY KNOW HOW YOU FEEL! My daughter was diagnosed on Nov. 11 2008.

It seems that you have already met some people that I have met through blogging! They have all helped me along the way! I hope you can find some help too! Welcome!

Wow, I'm totally impressed by you. You were so on top of this and it's hard when the clinics don't take us seriously. Good for you for taking it into your own hands! Scary about how serious she was. I'm glad she's now getting good care. I hope this starts to even out for you SOON!!! Sweet little thing! She's grown SO much!